Rocking out Labrador for 20 years: The Sundogs bring their unique sound to katingavik

From throat singing, to drum dancing, to Moravian brass bands; Labrador Inuit have never suffered from a shortage of musical talent. That musical spirit is alive and well today as many talented musicians and singers line Nunatsiavut coast; they bring contemporary sounds and Inuit life to the forefront.

“The music here is unique, each town has some local bands and their own sound. In Nain we have a community brass band, our band which plays rock music, and two others, plus a whole lot of up and coming young people,” says Harry Dicker Jr., lead singer of the Sundogs, who will be performing as part of katingavik inuit arts festival, a series of exhibitions, concerts and screenings by Inuit artists running in tandem with the 2016 Inuit Studies Conference this October in St. John’s.

Although there are challenges to being a band in an isolated community, such as getting instruments repaired, or maintaining them in extreme temperatures, Dicker says that Nain, and Nunatsiavut’s music scene is thriving, and has been for as long as he can remember. Dicker has been inspired to play music since he was a child. He picked up his first instrument in school, where he learned to read music. However, it was his father, who also plays in a band in Nain, who inspired him to go into the world of Rock N’ Roll.

Borrowing from rock, heavy metal, old-time crowd pleasers, and the unique influence of Inuit culture and traditions, Dicker describes the band’s sound as, “something special, something that you won’t hear anywhere else. When you hear one of our songs, you know it’s ours.”

The Sundogs have been rocking out Labrador Inuit for nearly 20 years. The band’s membership has changed over the years, but their spirit and energy has been entertaining generations in Northern Labrador. The band’s current line-up features Harry Dicker Jr. on lead guitar and vocals, Andrew Hamel on guitar, Ron Dicker on bass and back-up vocals, and Thomas Harris on drums.

The band has played across Nunatsiavut and Labrador, as well as shows in Halifax and Ottawa. However both Hamel and Dicker agree playing in the katingavik line-up for an audience from across the circumpolar world, will be an entirely new experience. “We’re all really excited, we can’t wait to go out there and see all the different people from different places across the North, and learn about their traditions and way of life,” says guitarist, Andrew Hamel.

Although he wishes it would happen more often, Hamel says one of the most special things his band does is collaborate with traditional Inuit drum dancers. “Watching the drummers in itself is entertaining, and you can just get lost in their movements and rhythm, it’s a spiritual feeling. When you combine that with a band it just creates this whole other waves of emotions and feelings, and really touches people,” he explains.

The Sundogs will cap off the day of festivities as they share the stage with the Ottawa-based Indigenous folk duo, Twin Flames, at the Ship Inn on Saturday, October 8th starting at 10 pm. 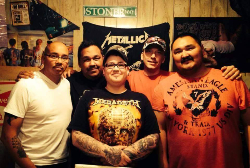