Northern Lights and Sea Grass:
Sewing Grass in Labrador for over Sixty Years

My name is Garmel Rich and in two months I will be 80 years old. I was born a few miles north of Rigolet in a place called Buff Head where I lived until I got married and moved to Goose Bay for 43 years. I have seven children; my oldest is 59 and my youngest is 44. Today I live in Rigolet, but I used to live along the north coast between Rigolet and Makkovik; there used to be little communities all along there, and people were always doing some sort of craft work. That’s how I learned grasswork, from watching other people when I was a teenager. People used to make grasswork pieces all the time back then, to sell to the industrial shop in Cartwright, where they would exchange their work for second hand clothes. This was before Newfoundland and Labrador became a part of Canada, of course, back when people could exchange craft work, and grasswork in particular, for other goods like clothes. This all changed after 1949 though, and a lot of people stopped making grasswork because they could not sell it.

I do all sorts of craft work: slippers, moccasins, mitts, dolls, crochet, embroidery, and beadwork on the tongues of boots, slippers, and mitts. I enjoy beadwork and slippers and these other craftworks, but grasswork is something I can sell, which is helpful as an old age pensioner, so I stick with it. I often put my pieces on consignment in craft shops and sometimes I take orders. If someone is going out to a show or a festival, they take my crafts and sell them, sometimes in St. John’s and sometimes further west like in Winnipeg; I used to do the same when I traveled for workshops. Sometimes my pieces are put on exhibit in museums, like at the Rooms provincial museum in St. John’s. I have a few pieces on display there now, including a piece from the exhibition SakKijâjuk: Art and Craft from Nunatsiavut that is being showcased here on the Tradition & Transition website.

Sometimes it seems like I always knew how to make grasswork, although it took a long time before I started to make it to sell on my own. I enjoy doing it and once I knew how it was done, I went on to try different things; it’s interesting to do because you can make anything you put your mind to but you either love doing it or you hate it. It takes a lot of concentration, planning, and patience because it takes a long time to make, and I like to say that it is the slowest craft there ever was. For example, a cereal bowl sized piece can take about a week to do, bigger pieces up to a month. But that’s because I have been doing it for so long and I have the time now to dedicate to it; if you were just starting and could only do an hour or two a day it would take much longer.

Working with sea grass from the coast is the best for sewing, it has the best colour and it’s the strongest; it’s not like ordinary grass that you get inland. I guess the salt from the water makes it more pliable then the inland grass. In rocky places you can get some nice colours too, like pastel purples, pinks, and yellows which if you keep them out of direct sunlight will keep their colour for a long time. Usually around November before the winter and snow sets in is when I pick my grass; you pick it when it has faded to a whitish colour while it is still standing but has curled a bit. Once you have picked enough grass, usually a bundle the size of your fist, you spread it out to dry really well, otherwise it will go moldy and you will not be able to sew a nice, durable piece with it. It usually takes about a week for it to dry out, then you bundle it back up and hang it somewhere dry and out of the sun until you are ready to sew. When you need it, you take what you think you can sew in a week, and then you dampen it a little so you can sew with it. You also have to pick out the discoloured pieces and put them aside for the stuffing.

People used to use grasswork pieces like bowls or baskets for practical purposes because it is water tight. You could use it to carry water, but only for short periods and you would have to dry it out right after to stop it from getting moldy. Mostly people would use it to carry things that are less wet like breads and dry berries like blueberries or for hot plates coming out of the oven. And they last a really long time too, as long as they don’t get too wet or too dried out so that the stiches fray. I have a piece from my grandmother which is over a hundred years old and is as good as the day it was made.

Sometimes, there are local workshops with an instructor who teaches people a little about how to do grasswork. I used to teach workshops too, although not so much now that I am older, but when I was younger I used to travel around the province to show people how to do grasswork. I demonstrated at festivals in St. John’s two or three times, I did five or six demonstrations in a couple of different places in Ontario, like at the Mariposa Festival on Toronto Island, and once in Prince Edward Island, as well as at Expo 86 in Vancouver. Only a handful of people make grasswork in Labrador now and it would be a shame for it to die out because it is a special kind of craft. One of my daughters, Josie, does grasswork; I taught her how to do it at first but now she developed her own style. I will not be doing it much longer because I will be too old, so I hope someone will take it up. It’s not something that just anyone can do, you have to have a talent for it and how we do it in Labrador is unique in terms of style. I was told that it was my great, great grandmother who brought the grasswork tradition to Labrador. She and her parents came from somewhere in the north, I am not sure where, but she showed people how to do grasswork, and it caught on and changed over time until eventually it became the Labrador specific style it is today. I am not sure whether or not this is true, it was my husband who told me that story who heard it from his mother, but I like to think that it is. I hope that there will be a renewed demand for it and that younger people will learn from us practicing today so that the tradition goes on.

The practice of sewing with ivik – the Inuktitut word for saltwater grass – has a long history within Nunatsiavut, particularly in Garmel Rich’s community of Rigolet which is renowned for its meticulous, finely coiled style of basketry. While grass sewing was always a respected and ubiquitous part of Rich’s culture, it was simultaneously admired and undervalued in the larger Inuit art market, the result of an unfortunate mixture of both geography and government bureaucracy. When Newfoundland joined Canada in 1949, there were disagreements between the provincial and federal governments as to who would assume responsibility for the Indigenous communities in the regions. The end result was that Labrador Inuit were left out of the government programs and funding that aided the careers of Inuit artists elsewhere. Coinciding with these changes was the closure of the industrial shop in Cartwright where crafts were sold, making it difficult for Inuit to sell or exchange their baskets. This led to a decline in the number of artisans who were able to continue practicing this time-consuming craft.

Working independently of the arts industry during a period of immense cultural upheaval, Garmel and her contemporaries forged their own artistic paths, experimenting and innovating along the way. Their tenacity and patience mirrors the practice of basketry itself and serves as a testament to the resilience of Elder artists in Nunatsiavut. In addition to keeping the form vital, Garmel’s dedication to the grasswork tradition has ensured that the art, and the cultural knowledge it embodies, can be passed down to future generations 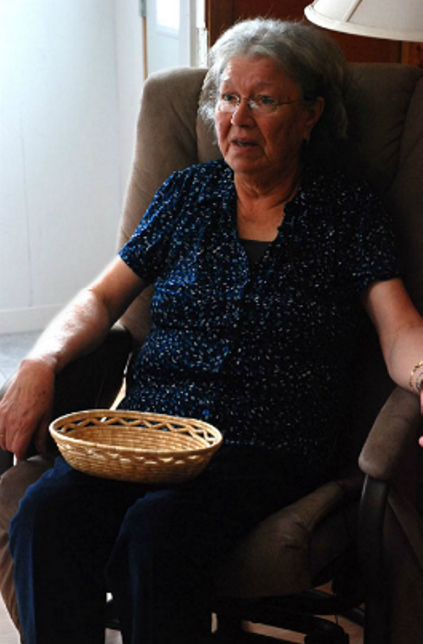