Reading the Knowledge of Plants

Carol Gear of Makkovik, Nunatsiavut remembers growing up on the Labrador North Coast and seeing wild irises along the shore. Her grandmother would always point them out to her and instilled in her that she must always look, but never touch the delicate flowers. “If you were caught picking those, you might as well have robbed a bank,” Gear chuckles. “They knew if we kept letting kids pick these none [would be] left for others to enjoy.”

Gear says that there have been many changes in the environment in and around Makkovik since she was a little girl, and that it is now rare to see one of these treasured flowers. “This summer while walking along the water with my daughter we found one of the irises. If my grandmother hadn’t instilled the knowledge [of the irises] in me, then my daughter would never have saw the flower, and wouldn’t have had the opportunity to learn about it.”

It is these relationships between plants and Labrador Inuit living in Makkovik that researcher Erica Oberndorfer explored during her P.h.D. Now Oberndorfer, this year’s Tradition & Transition post-doctoral fellow with the Labrador Institute, is working with the people of Makkovik to take that knowledge and turn it into a book for the community. “We’re making this book to have a hands-on resource people could look at together. Grandparents could look at the book with grandchildren and have something all generations can enjoy; a book that focused on not just plants, but how people and plants have relationships,” says Oberndorfer. After a round of community meetings, people in Makkovik thought this would be the best use of her studies.

The book will explore family places, how people lived, and the reasons plants were, and still are, important in the day-to-day life of Makkovik Inuit. “It will be a resource, both for people to be able to share their own family stories, and a way for young people to learn, not just about plants, but plants in context of their families’ lives,” says Oberndorfer.

Plants factor into the lives of Inuit in many ways from making jams from local berries, to medicines, to making dyes, to building wooden tools. One of the aspects that Oberndorfer has been particularly interested in is the relationship between fishing and plants. Inuit would build a killik, or homemade anchor made of rock and juniper wood, mend their nets with spruce netting needles, and smoke fish using blackberry bushes. “If you continue the cycle, other things [such as the fisheries] make plants possible, like in fishing you use the kelp you picked from your nets and the left over fish parts as fertilizer to grow your rhubarb better,” says Oberndorfer.

For Carol Gear it is about taking stock in the ingenuity of the people of her home, something she says folks in Makkovik often overlook because these are things they have always done for generations. “You don’t realize these connections because it’s a daily chore - because you just go and do it,” Gear says. “It’s about stopping and noticing what we have and being thankful what we have because it may not always be there.”

Gear says that Makkovik is changing. The community is expanding, berry patches are being replaced with development, new species are being introduced, and old ways are being forgotten. “Over the last few years we’ve lost so many Elders and so many people that worked with plants and used plants as part of their living,” says Gear. “You used to have elderly men going out that couldn’t buy fibreglass boats, so they had to haul their own logs and make their own boat. Things like that we’re losing; you may have a handful of people now on the coast that can actually do things like that anymore.”

While there are old ways that are being discontinued, there are also traditions that continue on below the surface. Things that are so normal and vital to daily life that they can go by unnoticed.

“People make use [of plants] in ways that are ingenious but is second nature to people,” says Oberndorfer. “I think that’s why sometimes when you go into a community, if you’re not from there and you ask people what is this used for, it can really place people on the spot. If you just ask them point blank they sometimes have trouble responding. But if you get to know people more and chat in a comfortable environment -- that’s when you start to get these stories and hear about the resourcefulness of people.”

What has really impressed Gear is that Oberndorfer has made sure to check in regularly with the people she has interviewed to make sure they are ok with every step of the process, and to share her findings. All of her research is being kept in the community museum. For Gear, Oberndorfer has become a fixture in the community. She regularly visits, takes part in swim races at the annual trout fest, or sings songs about plants at the jamboree. Gear is impressed with the amount of care Oberndorfer takes in building and maintaining relationships with people in the entire community. She’ll bring oranges and coffee creamer when the Makkovik store runs out, or she’ll take time to send people pictures from her travels.

“All the information is back here, and that’s where it should be,” says Gear. “A lot of researchers will come in and they’ll do one interview and think they have all they need. Then they leave and you find out later it was reported wrong. They just came in, got the information, and they’re gone without reporting back to the community. Erica is doing it right.”

Oberndorfer will be working with Makkovik for the next year to produce the community plant book. She hopes it will help people to recognize and celebrate their relationship their culture, ingenuity, and relationships to the natural world. 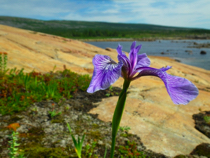