The unique story of Labrador Inuit culture comes to life in the latest edition of the province’s premier cultural magazine, Newfoundland Quarterly (NQ). The magazine examines Labrador Inuit life from early European historical records as well as more recent records by Nunatsiavummiut, in an effort to steer their culture and language.

The special “Labrador Inuit” edition serves as a companion issue to the 20th Biennial Inuit Studies Conference happening in St John’s, October 7th-10th, 2016. The conference, co-hosted by Memorial University and the Nunatsiavut Government, will bring together hundreds of Inuit, researchers, and Inuit organizations to share their knowledge and expertise around the subject of this year’s theme, “Inuit Traditions.”

“What makes this issue special, in terms of a concentration on Labrador Inuit, is the caliber of contributors,” explains NQ’s managing editor, Joan Sullivan. “I try not to throw around the term 'experts' but they are all experts in their various disciplines – art history, field research [etc.]. And much of the imagery they provided is rare and has not been published before.”

The magazine opens with a guest editorial in both English and the Labrador Inuktitut from Nunatsiavut President, Johannes Lampe. He writes of the challenges facing Labrador Inuit and the measures being taken to meet these challenges head on. As you read through the magazine, it becomes clear that Lampe is not acting alone in his journey to invigorate Nunatsiavut culture. The edition highlights the diverse work of Labrador Inuit in areas such as art, crafts, film, music, community-led research, and history.

“I'm actually hoping that even readers who are familiar with the Labrador Inuit will read and see something that's new to them” says Sullivan. The response from readers has been very positive; this issue is nearly sold out.

One of the most striking aspects of this edition of NQ are the visuals representing Labrador Inuit: their land, their history, and their culture. In Susan A. Kaplan’s essay, images of Inuit children’s drawings from the 1970s give us an intimate look at life in Labrador at that time. In Marianne P. Stopp’s work, European portraitures of Inuit around the time of contact provide valuable insight into traditional dress, while revealing darker stories of colonialism.

“Many of the positive comments we’ve received [on this issue] are about the visuals,” explains Sullivan. “The portraits, the children's drawings, Michael Winsor's landscape photographs; it's all stunning and often quite unusual. Also our designer, Vanessa Stockley of Granite Studios, researched the Labrador Inuit culture to carefully develop a striking, consistent, and relevant palette for the issue.”

Copies of the “Labrador Inuit” edition of Newfoundland Quarterly are currently on newsstands. Registrants of the 2016 Inuit Studies Conference will receive a copy of this special issue in their conference package. 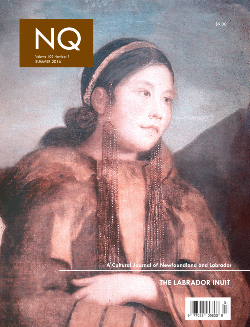