The theme of the 2017 Nunatsiavut Heritage Forum, Preserving Heritage, Promoting Tourism is a perfect fit with this year’s host community of Rigolet. The town has been a living example of this, working for years to develop innovations and infrastructure that promote both tourism and preserves the community’s Inuit, trapping, and trading histories.

“I think having the Heritage Forum here is a wonderful thing. We have a lot to offer and a lot to be uncovered,” says Jack Shiwak, the AngajukKâk of Rigolet. “Once people get here to really have a look at what we have to offer, I think there will be a lot of excitement among not only the community of Rigolet but other communities too; they’ll say you have really got something there.”

Heritage Forum facilitator, and Tradition & Transition researcher, Andrea Procter agrees. She has been working with Inez Shiwak and others in Rigolet to organize this year’s forum. Each Heritage Forum usually has a theme, but Procter believes this year’s theme is special.

“It’s really nice this year to have a very specific focus for the Heritage Forum, and especially in Rigolet, because there are so many exciting things happening in heritage tourism here,” says Procter. “They’ve really developed a lot of innovative tourism experiences in Rigolet; like the boardwalk, the Net Loft, Strathcona House, or all the archeological work at Double Mer Point. So it will be nice to get a group of community members together to talk about these things and talk about this balance between tourism and heritage preservation and protection.”

With a population of just 300, Rigolet built North America’s longest wooden boardwalk, over 8 KM in total. The boardwalk stretches along edge of the water where it is not uncommon to see minke whales (known locally as grumpuses) splashing in the waves. At the opposite end of the boardwalk from Rigolet is Double Mer Point, where a team of archeologists are uncovering 3 traditional Inuit sod houses at the request of the community. The archeologists are led by Tradition & Transition researcher, Dr. Lisa Rankin of Memorial University’s Archeology Department. The team is working with community members in Rigolet to identify what they find and employs a summer student each year.

Rigolet has also put much care into restoring both the Net Loft Museum and Strathcona House: two landmarks of the community’s past as a Hudson’s Bay trading post. The Net Loft was once a storage facility where local fishermen would keep their fishing nets for the winter, now the building is a community museum. Strathcona House is named after Lord Strathcona, famous for driving the last spike into Canadian Pacific Railway. Although, while he was living in Rigolet, he was simply known as Donald Smith. The house is a replica of Smith’s, which was known at the time as the, “grandest house in all of Labrador.” Now it serves as the community's Cultural Interpretation Centre for tourists and community members alike.

This year’s Heritage Forum promises to be much more active than previous forums with walks on the boardwalk, visits to Double Mer Point, tours of the town and more. The organizers want to give this year’s forum participants a firsthand look at Rigolet’s tourism infrastructure.

“I think that’s an important part of of our tourism strategy; it’s more of an experience to show rather than just talk about it,” says Shiwak. “People gain a lot more if you can go to a certain site and somebody can explain what happened here and what’s the significance of the place. It makes the experience more meaningful.”

There Heritage Forum is often touted as being one of the highlights of the year of its participants. It’s a chance for friends and colleagues working in similar fields to get together and learn from each other.

“It’s a rare opportunity for you get a good couple of days with a bunch of wonderful people who have a lot of similar interests and who are working on the same sort of things,” says Procter with delight. “The consistency of having these conversations every year helps to build on what’s already going on in Nunatsiavut in terms of heritage work. It helps everybody learn more, support each other more, and be more accountable for their work because they have to discuss with the community what they have planned and what they’ve been doing since last year.”

“She’s going to come to the Heritage Forum this year and talk about her work,” explains Procter, “and how other communities can take those ideas and use them in their own heritage work, in their own efforts to develop tourism experiences.”

Participants in this year’s Heritage Forum will arrive in Rigolet May 28th with the forum beginning the 29th and lasting until June 2nd and it promises once again to be full of learning, laughter, and memories. 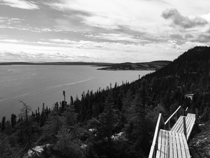