The pride and excitement is evident in Mary “Binky” Andersen’s voice as she talks about how she and her bandmates in the Nain Moravian Brass Band are improving all the time.

“I feel really good when I see the other players improving, and it makes me want to encourage them to play more,” says the 20-year-old trumpet player, “we are sounding way better than we did before - even earlier this year - because we’ve been practicing once or more a week. You can really hear the difference.”

The band is getting ready to perform October 8th as part of the katingavik inuit arts festival, which is part of the public face of the 2016 Inuit Studies Conference happening in St. John’s, NL the same weekend.

Andersen is excited for all the opportunities the brass band has introduced to her life; from a chance to master her instrument, to chances to travel and share their music with audiences beyond Labrador.

“I’m really amazed to be a part of this brass band that gets to showcase our talents and we get to be part of something big like the Inuit Studies Conference,” Andersen exclaims! “It’s really good for them to include us because we have a lot to show them. The tradition of the brass band almost died out here in Nain, but we’re here to show that this music is back, and it makes me feel proud to be part of something like that.”

Brass instruments and hymns were originally brought over to what is now Nunatsiavut by Moravian Missionaries from Germany in the 18th and 19th centuries. Inuit in Labrador truly made these instruments, and this music their own. The melodies that once belonged to Missionaries from a faraway land are now as familiar to Nunatsiavummiut as the sound of the wind blowing across the ice.

Andersen, who plays first trumpet in the brass band says that when she plays with the band she feels a part of herself connect with her band members, her community of Nain, and her heritage.

“It feels really good because we know that we are carrying on the tradition that people here are familiar with,” she explains. “It’s good for people to continue hearing it, to know that 100 years ago the same songs that were being played, and practiced, and mastered. It’s good to keep it alive here in our communities, to practice our traditions.”

The band consists of Andersen and Darlene Holwell on the first trumpet, Gwen Dyson and Eva Obed on second trumpet, Karrie Obed, Michael Dyson and Simeonie Merkuratsuk on the Euphonium and Matmatil Agnatic and Devin Dyson on the trombone.

Mark Turner is a researcher with Memorial University and Manager of Audio Video Archives and Media Literacy with the Tradition & Transition Project. Turner has been coming to Nunatsiavut since 2010, and most recently has done work with helping the brass band to organize. A trumpet player himself, he was drawn to Nunatsiavut’s musical traditions.

“There are a different set of emotions you experience when you watch the brass band perform in Nain,” recounts Turner, “from sorrow to gratitude to happiness. It is cathartic. And it is a type of catharsis I have never experienced anywhere else. To my mind, music operates in a different way in Nunatsiavut.”

When asked about the sharing this musical experience with a new, and much larger, audience at katingavik Andersen responds with excitement, “We’ve been practicing a lot for the conference and we have so much more practicing to do in order to master every song. I can’t wait to share with all these new people our music.”

The brass band plans on bringing their Moravian hymns with them to St John’s for katingavik, where they will be playing at the St. Andrews Presbyterian Church October 8th along with other Labrador Moravian musicians. To hear the band and meet more of its members, visit the Tradition & Transition Vimeo page. 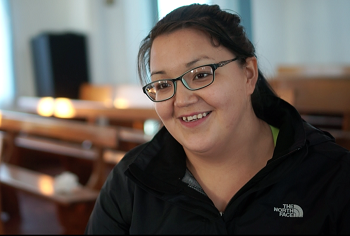